Former prime minister Kevin Rudd has been mistaken for an Uber driver during a recent night out with his family in Noosa.

The Bunch got wind of the story after his daughter Jessica told the story over a couple of tweets on Tuesday.

It all started innocuously enough, it was raining so Kev dropped his family off at the front of a restaurant before he went to find a park.

Jess then thought she saw “some people pile into his car” but told herself it was just a similar-looking Uber.

It wasn’t. It was Dad’s car. The lovely but tipsy crew had been at the restaurant since lunch and asked for a lift to Hastings St. Said they’d pay. He said he’d give them a lift. Took them half the ride to discover who their driver was. He’s here now.

Apparently, while Kev was slowing looking for a parking spot, a spirited bunch who had been at the restaurant since lunch, opened the passenger door, hopped in and to be taken to town’s main drag, Hastings Street.

While many of us would have said “yeah nah, I’m not your ride mate,” Rudd obliged.

Jessica added that it took the boozed lot half the ride to realise it was the former prime minister at the wheel.

Rudd himself backed up the story, saying “what was a man to do?” when his four passengers were getting a soaking with “no Uber in sight.” 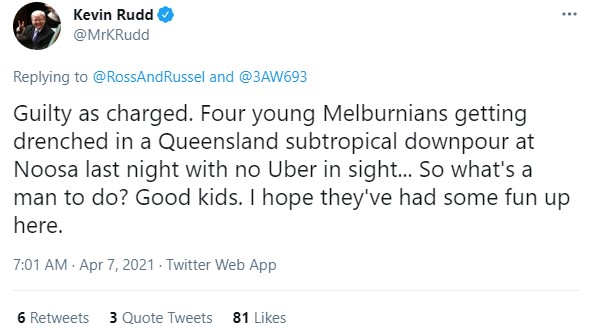 So, when did you have a surprising brush with fame? The Bunch opened the phones on Wednesday morning.

Hit PLAY to listen in…

Cadbury Just Confirmed A New Caramilk/Marble Cross-Over, So Shut Up And Take Our Money!

Jamie Oliver Has Released A New Hot Cross Bun Recipe And Everyone Agrees, It's Not A Thing