As you all know, I’m an avid video gamer. Some people play sport for a hobby, some join book clubs, I like to game. It’s what I do.

Most of the time, gaming is all about the latest and greatest, the newest releases and nothing else will do. But occasionally, I’ll stumble across a game that slipped past me when it first came out. A game that, once I’ve had a bash at it, will have me asking “why didn’t I play this earlier?!”

Recently, I have found my calling, with “Ark: Survival Evolved”, which is a game that came out four years ago. How I missed it at the time, I’m not really sure, but the important thing is that I’ve found it now… and it lets me have pet dinosaurs!

You see, Ark: Survival Evolved is (as the name would indicate) a survival game that involves base-building, resource-gathering and, most importantly, taming/naming dinosaurs.

Well may you think this article will act as some manner of game review that will help you decide if you want to play it or not, but you thought wrong. The reason I’m typing this is simply to skite to you about the cool names I’ve come up with for my tamed friends.

I love a good pun. A good pun, as they say, is its own re-word! And that’s why I’ve enjoyed naming pet dinosaurs so much.

I have a velociraptor called Teeth Richards and a female sabre tooth called Incisor Minelli.

Plus, there’s another raptor called Snappy Gilmore and even a flying dinosaur called Pteranadon Cheadle! Right? Am I right?!

That’s awesome, Nige, I hear you say, but what about your female dire bear? What have you called her? Well, of course her name is Amelia Bearheart. Can’t fly a plane very well, but if you wanna smash a beehive, she’s your bear. 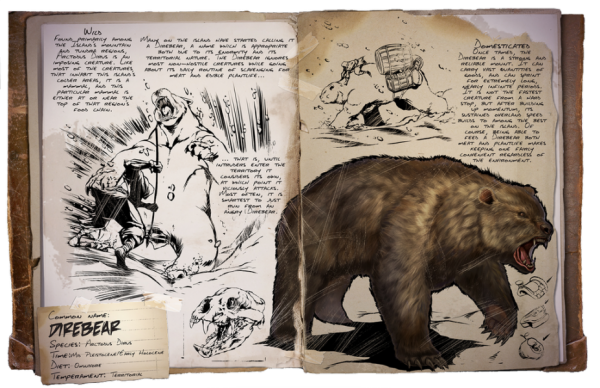 Do I chuckle too hard at my own silly creations? Yeah, of course I do. Do I openly encourage you to get this game, then just tame dinosaurs and give them a punny name? You’re damned right I do.

Wash your hands, stay safe and take plenty of tranq arrows when you go hunting, friends!